Casatiello is a Neapolitan stuffed bread sent from the Gods.

I imagine that it was the Gods who back in 1600 hundreds (you can find referrals to stuffed breads already in Greek literature) advised humans to stuff bread with cheeses, cold cuts, pork greaves and lard. Stop take a breath and read that again. Honestly only a God could of showed up in our dreams in order to make a loaf of bread rise to higher states. Easter for us Italians is just that, loads of family versions of Casatiello.

Traditionally we only make it during this time of the year as it is not the lightest of breads and quite addicting, but definitely worth the wait. There is also the religious story behind the design of the bread as the crosses on the eggs represent the crosses of Jesus and the circle in the middle the stages and resurrection and most likely the cycle of life. This bread has been in the makes for centuries and thank God because in my opinion it is one of the greatest highlights of the year. Treat yourself every Easter or screw it make it whenever you feel like it. There is really nothing I wouldn’t do for a bread so divine but know that after this nothing will EVER be the same, well at least no loaf of bread will.

1. Add the yeast to lukewarm water and gently stir until dissolved. Set aside as you will need it shortly to add to the flour.

2. Mix the flour with the warm water, mix gently, and slowly add the olive oil/lard.

3. Then add to the mixture, little by little, the yeast that you previously combined with the warm water, a pinch of sugar.

4. When the mixture begins to form, add salt and continue to knead the dough. Llet rest for about 15 minutes. 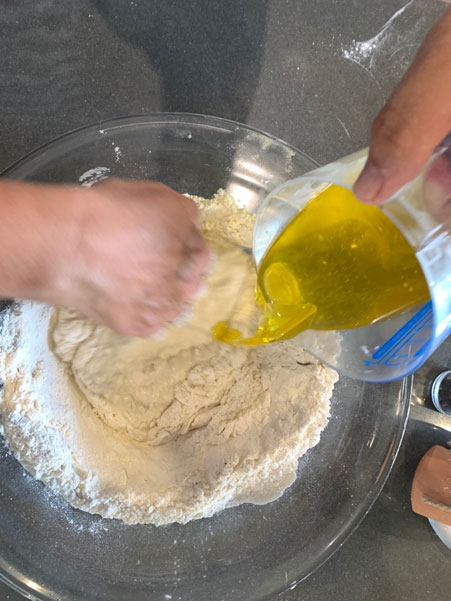 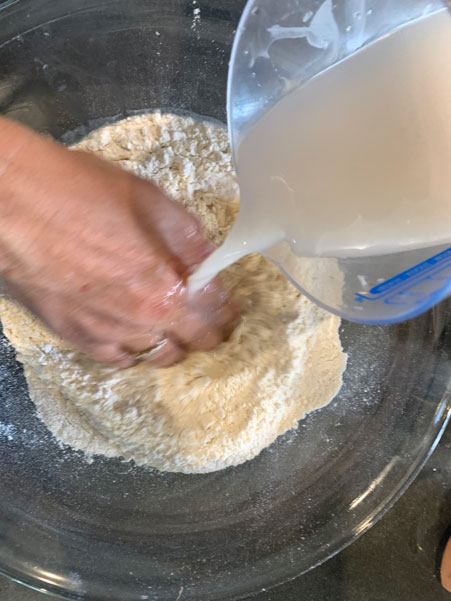 5. Now you can add all the good stuff like the grated pecorino cheese, the cubes of provolone, pepper, greaves, and here is where you can also add the salami to the doughand knead it for a little longer. 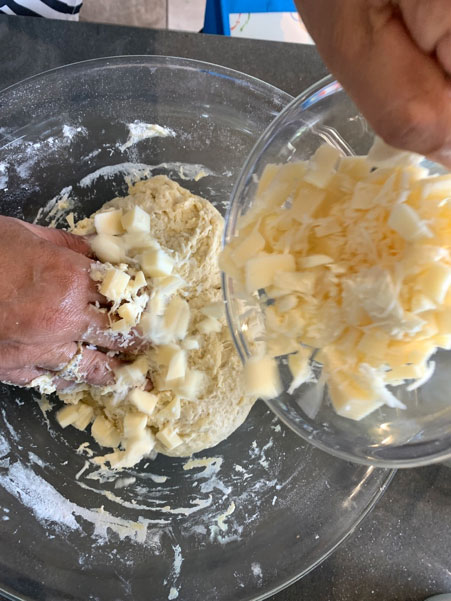 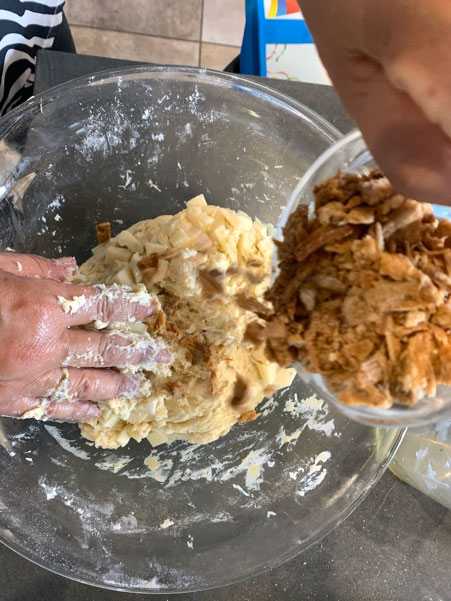 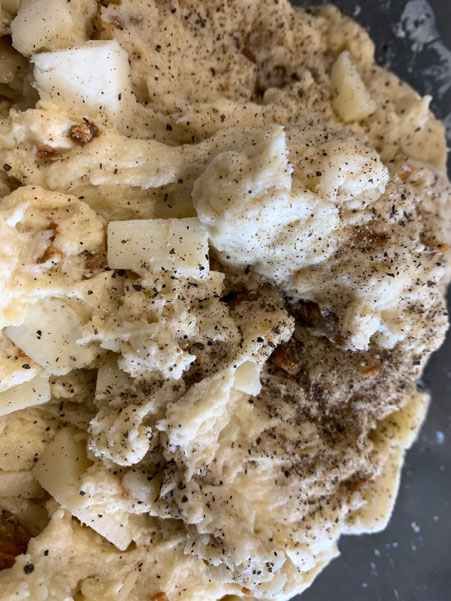 6. Place the dough in a floured bowl after kneading it briefly by hand. Cover the bowl with a damp cloth and set aside to rest in the refrigerator for 12 hours. You can now rest also 🙂 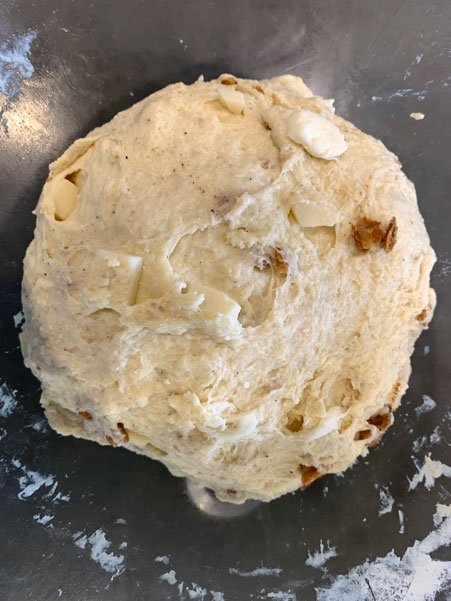 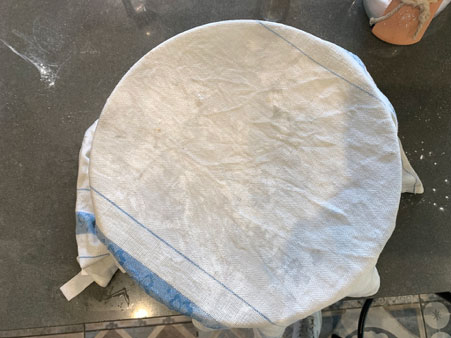 7. The next day, take the dough out of the refrigerator and shape it into a large donut and insert it in the traditional wheel with the hole (floured) joining the two ends. Save enough dough to create four crosses that will be holding the raw eggs on top of the dough.

8. Carefully place the raw eggs with an equal distance between them and decorate the tops by forming a cross with the dough strips previously made. Let the dough rise again until the initial volume has doubled in size. 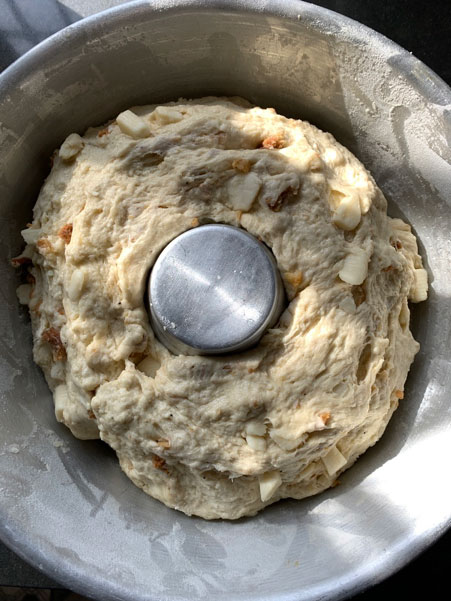 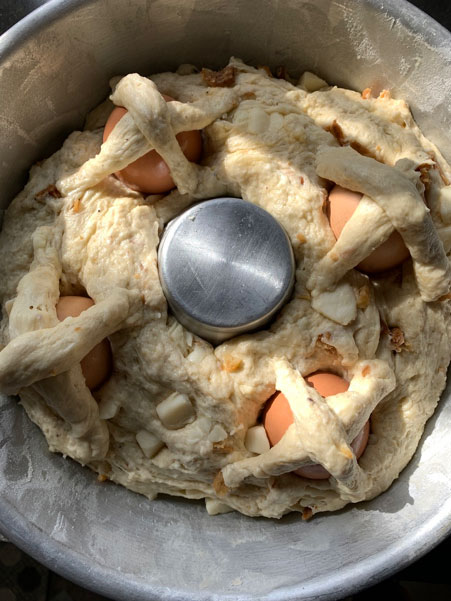 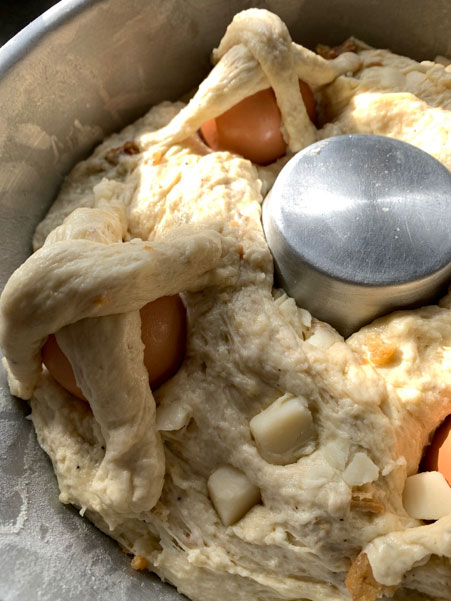 9. Brush the surface with an egg yolk at room temperature. Preheat the oven at 200 ° then lower it to 180 ° and cook your Casatiello for about 50 minutes. Every oven is different so I would suggest to keep a few timers on to check on the status of the dough

One the bread is gold and crispy let it completely cool down before taking out of the wheel. I warned you that this bread is quite addicting yet so divine. With traditions comes all the goodness and I hope this can now be part of your tradition or recipe book too!

Store this bread in a warm place and it hold up to about 5-6 days.

I am just a simple gal who is always on the hunt for food experiences, cultural exchange and foreign traditions. By sharing my journeys, I hope to spark conversations and connect further, while providing travel guides, recipes, local stories and all that comes my way to spike hunger for what you are truly craving. While I’m not doing any of the above I teach traditional cooking classes from my home on the island of Capri @thebluekitchencapri.with the hope of leaving you a bit more "Caprese" than before. So, let’s let our feelings loose and connect through the moments that spark conversations. Time to eat! Ciao for now, Stefanie